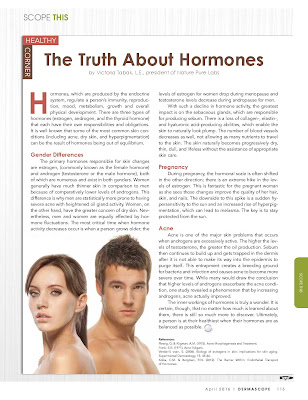 
The primary hormones responsible for skin changes are estrogen, (commonly known as the female hormone) and androgen (testosterone or the male hormone), both of which are numerous and exist in both genders. Women generally have much thinner skin in comparison to men because of comparatively lower levels of androgens. This difference is why men are statistically more prone to having severe acne with heightened oil gland activity. Women, on the other hand, have the greater concern of dry skin. Nevertheless, men and women are equally effected by hormone fluctuations. The most critical time when hormone activity decreases occur is when a person grows older; the levels of estrogen for women drop during menopause and testosterone levels decrease during andropause for men.

With such a decline in hormone activity, the greatest impact is on the sebaceous glands, which are responsible for producing sebum. There is a loss of collagen-, elastin-, and hyaluronic acid-producing abilities, which enable the skin to naturally look plump. The number of blood vessels decreases as well, not allowing as many nutrients to travel to the skin. The skin naturally becomes progressively dry, thin, dull, and lifeless without the assistance of appropriate skin care.

During pregnancy, the hormonal scale is often shifted in the other direction; there is an extreme hike in the levels of estrogen. This is fantastic for the pregnant woman as she sees those changes improve the quality of her hair, skin, and nails. The downside to this spike is a sudden hypersensitivity to the sun and an increased rise of hyperpigmentation, which can lead to melasma. The key is to stay protected from the sun.

Acne is one of the major skin problems that occurs when androgens are excessively active. The higher the levels of testosterone, the greater the oil production. Sebum then continues to build up and gets trapped in the dermis after it is not able to make its way into the epidermis to purge itself. This entrapment creates a breeding ground for bacteria and infection and causes acne to become more severe over time. While many would draw the conclusion that higher levels of androgens exacerbate the acne condition, one study revealed a phenomenon that by increasing androgens, acne actually improved.

The inner workings of hormones is truly a wonder. It is certain, though, that no matter how much is learned about them, there is still so much more to discover. Ultimately, a person is at their healthiest when their hormones are as balanced as possible.

Every year we anxiously await the holidays for the opportunity to do something that we do only this time of year. Sharing time with our loved ones, maybe a vacation, maybe it's just to take a break from the usual routine of our lives, maybe something as simple as doing things that will make us laugh a little harder or smile a little bigger. Even something so simple can be so huge because sometimes we forget the small things that make us happy when we get so caught up in the daily grind. Please enjoy the holidays and pay close attention to the little things that make you smile inside, notice that warm and fulfilling experience, and once you've got it, do more of THAT because it will build, and ultimately it ignites your soul on fire. 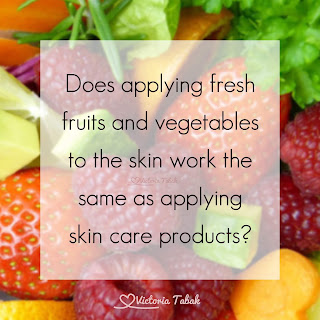 Skin Care Tip 💚  Although applying fresh fruits and vegetables 🥒 directly to the skin may have certain immediate benefits and most importantly it typically feels really nice, alot depends on what is the actual fruit 🥑 or vegetable that is being used. When we eat something our stomach has certain acids and enzymes 🍍 that can break up and hydrolyze all of the components of the fruits and vegetables allowing for the body to absorb all of the benefits 🧘‍♀️ Skin on the other hand cannot absorb many things because the molecular size 🔵 of the fruit, vegetable, or other ingredients in that case, are too large to penetrate the outer layer of the skin.  For ingredients that are made up of large molecules, in order to penetrate the skin, there must be a certain vehicle or a delivery system to carry the ingredient through to the epidermis, to deliver the potential benefits 👩‍🔬 Returning back to the question, "does applying fruits or vegetables directly to the skin 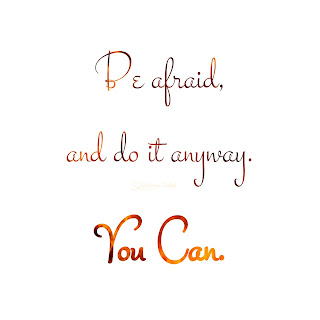 Happy Friday 🧚‍♀️ ... Let's start with me mentioning that I get super super nervous and I am horrified every time I need to or would like to do a live stream 😱 Earlier this week I did a live Facebook stream from a packed class I was teaching in front of a big group of people and the Facebook live audience...and I totally and entirely fell flat on my face. 🙈 Regardless of the reasons, though justifiable, they are irrelevant. 🙊 I do not regret it for a second becaus it was me, it was genuinely real and sometimes that’s what happens❣️ There is no other way, but to always move forward in the face of fear, no matter what, because fear will always try to hold us back 😱 Don’t let it hold you back, you’re stronger than that fear 💪 What is something you did this week that was scary for you, and did it work out❓